trast to the unique and, sometimes chaotic sounds of Aoyama, where not only young people but also some political activists walk, march, yell, and “chant” their slogans, being monitored by the police (some use microphones and vehicles with loud militant music, giving us the time-slipping dizziness of the extreme-right era of Japan and reminding us oh-this-is-also-freedom-of-expression”). Such  atmosphere of the Daibo Coffee House also attracts high-profile people and “household names,” such as Haruki Murakami, the nominee for the Nobel Prize for Literature; Seiji Ozawa, the world famous maestro who conducted the New Year’s Concert of the Vienna Philharmonic Orchestra, and James Freeman, the owner and founder of “Blue Bottle

Coffee.” Daibo-san has also had the experience of being filmed in a documentary directed by Brandon Loper.

Daibo-san’s graceful and elegant conduct (which is not at all showy or stagy), following his regular procedure, always remind us of the traditional Japanese tea ceremony, Sado（茶道), which has been developed based on the principle of Zen Buddhism, and thus became uniqueness not only in Japanese coffee culture but also all over the world.

The Daibo Coffee House looks like a tea house, a Cha-Shitsu（茶室）, which is a small tea room with simple but profound ambiance (Phil Knight of Nike and Larry Ellison of Oracle also have their private Cha-Shitsu rooms in their houses in the US), giving us a quiet moment of calmness and peace. This precious and peaceful moment is called Ichigo-ichie（一期一会）in Sado, which is also the title of this blog. Ichigo-ichie is the crucial concept of Sado, which means that the occasion is not accidental but rather intentional caused by spiritual fate（縁 en）,and the host and guests should therefore cherish the moment with mindfulness by being grateful to each other, as this moment may be the last one. An example of Sado appreciations is the “Itadaku（いただく）,” in which guests raise their Cha bowls once with both hands before drinking, as an expression of  their appreciation to the host. Interestingly, it is strictly prohibited to publish textbooks describing higher levels of Sado in order to stimulate pupils to concentrate on each conduct of their masters’ （所作）in all sincerity comprehending the precious gift of Ichigo-ichie (although there are several textbooks for beginners at more elementary levels).

Daibo-san successfully initiated his second act as an instructor for young coffee masters and a “shy” performer for his fans, including me, in 2013. There are several seminars and coffee times with Daibo-san and his wife in Japan. Appreciating his performance, I strongly assert that Daibo-san is a great mentor of coffee reminding us of the coincidence of his Japanese name written in Chinese characters; 大坊 (“大 (dai),” which means “great,” “large,” or “big” and “坊 (bo),” which means “monk” or “priest.”)

1) Pour hot water into each coffee cup slowly from Daibo-san’s exclusive kettle, into which he himself has hammered the beak to mold it, and leave it to warm adequately for a few minutes 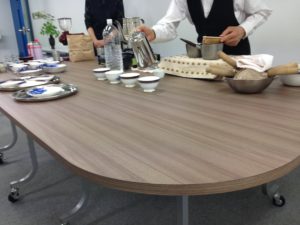 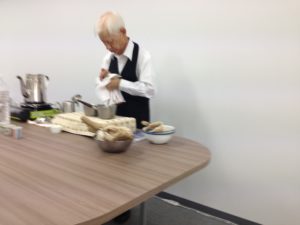 5) Now you are ready to make Daibo Coffee! Grab the kettle with your hand (if you are right-handed, grab it with your right hand) and fix the nel with the other hand (left hand) over the cup 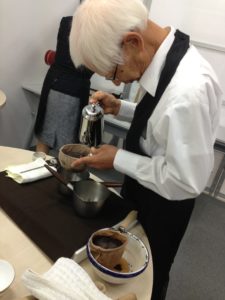 6) Pour the hot water from the kettle as slowly as possible into the center of the nel imagining that a drop of water falls on the mound of powder in the nel and rises it from the bottom. Daibo-san always expresses the dropping sound as “tachi-tachi-tachi.”

8) Stop pouring according to your preference

(Every photo was shot by Kay Koyama)

I wrote an article on

「自分と対話する。Contemplate in your deep "SELF."」

「菅さんからトランプ氏へのお見舞いツイッター英文が『レベル低すぎる』と身内の自民党内から多数、とのこと（発信元は共同通信社）JPN PM Mr. Suga probably wanted to say like this」

「『英語圏』という文化圏と、『日本』という独自性。English-speaking countries vs., Japan, as a "one-and-only" being.」

小山ケイの翻訳コーパスから6 -「あなたの業（ごう）を主にゆだねれば、計らうことは固く立つ」"Commit to the LORD whatever you do, and he will establish your plans （箴言第16章3節）(Proverbs 16:3)"